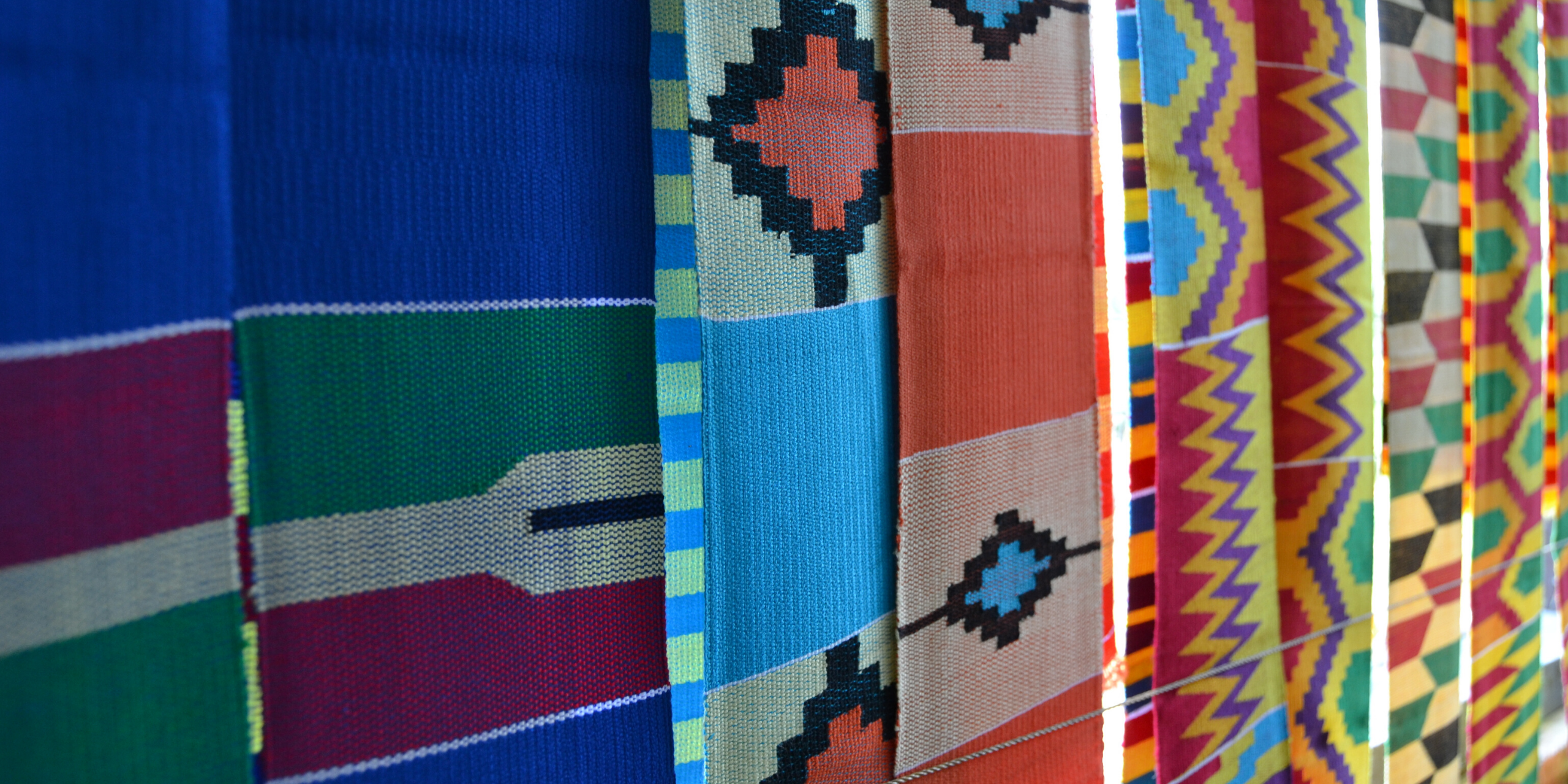 This is a brightly colorful fabric which comes from the word “kenten”, which means basket in the Asante dialect. Akans also refer to kente as “nwentoma”, meaning woven cloth. The kente is a unique cloth which is easily recognizable worldwide. The ewe is another ethnic group who also weave kente in Ghana. Kente cloth weaved by the Ewe people has a wider variety in patterns. Rather than belonging to royal tradition, the Kente cloth in this way relates more to the experiences of daily life.

The origin of Kente is explained by both legendary and historical accounts. For the legend, it has been said that two men named Kwaku Ameyaw and Ota Karaben from the town of Bonwire had their weaving lessons from observing a spider that was weaving its web. They tried to do same by weaving a beautiful fabric. They later told their story to the then Chief of Bonwire, Nana Bobie Ansah I, who in turn told this important news to the then king of Ashante, The Asantehene, Nana Osei Tutu. During his reign, the King approved kente as a royal cloth which was worn by Kings, Queens, and important figures of state in Ghana’s society during ceremonial events and special occasions.

Historical accounts trace the origin of kente weaving to early weaving traditions in ancient West African Kingdoms that flourish between 300 AD and 1600 AD. Some historians maintain that kente is an outgrowth of various weaving traditions that existed in West Africa prior to the formation of the Ashanti Kingdom in the seventeenth Century.

The production of the cloth has been improved over the years. Kente in the past had all of the thread used made from silk, but now this famous cloth is made from rayon, cotton, and silk, which makes it affordable to everyone.

Kente is no more a reserve of royals but for people of all social status worn on occasions like funerals, festivals, naming ceremonies and marriage ceremonies and also given as gifts. Kente is known over the world and is most widely a revered textile. It is however good to note that some patterns are solely the exclusive preserve for royalty.

Bonwire (leading kente weaving centre), Sakora Wonoo, Ntonso, Safo and Adanwomase are noted for Kente weaving. However, other nearby towns and villages named Abira and Ahodwo are also into Kente weaving. All these towns are located in the Kwabre East Municipal in the Ashanti region.

Each kente pattern has a name and its own meaning. The meanings are related to past events, religious beliefs, political ideas, and social customs.

The type of raw materials used for weaving include:

Most often, the threads used are hand made by the people making the kente. This is much cheaper than buying a ready made thread from the market.

The dye used to change the thread color can be made locally by grinding the bark or leaves of trees. Local dyes are preferred as the colors do not fade but dyes are equally imported from China or Japan.

Kente cloth is sorely hand woven without a machine. The kente cloth is woven on a narrow horizontal wood structure called a loom.

Weavers sit inside the handloom to create long, narrow interwoven strips. A heddle is an integral part of a loom. Each thread in the warp passes through a heddle, which is used to separate the warp threads for the passage of the weft. The typical heddle is made of cord or wire, and is suspended on a shaft of a loom. Each heddle has an eye in the centre where the warp is threaded through. As there is one heddle for each thread of the warp.

The cloth is woven in narrow strip (called ntomaban or bankuo) that is about 3-5 inches wide and about 5-6 feet long. Several strips are sewn together to make a wider piece of cloth for both men and women. 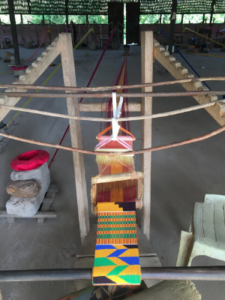 Every kente color has meanings attached to them. Below are examples of kente colors and their meanings:

To experience the display of the fascinating kente cloth, just make it a point to be at any of Ghanaian ceremonies, be it an engagement ceremony, state function or festivals. Also make sure to have a piece of this beautifully weaved cloth or any kente wear for memories.