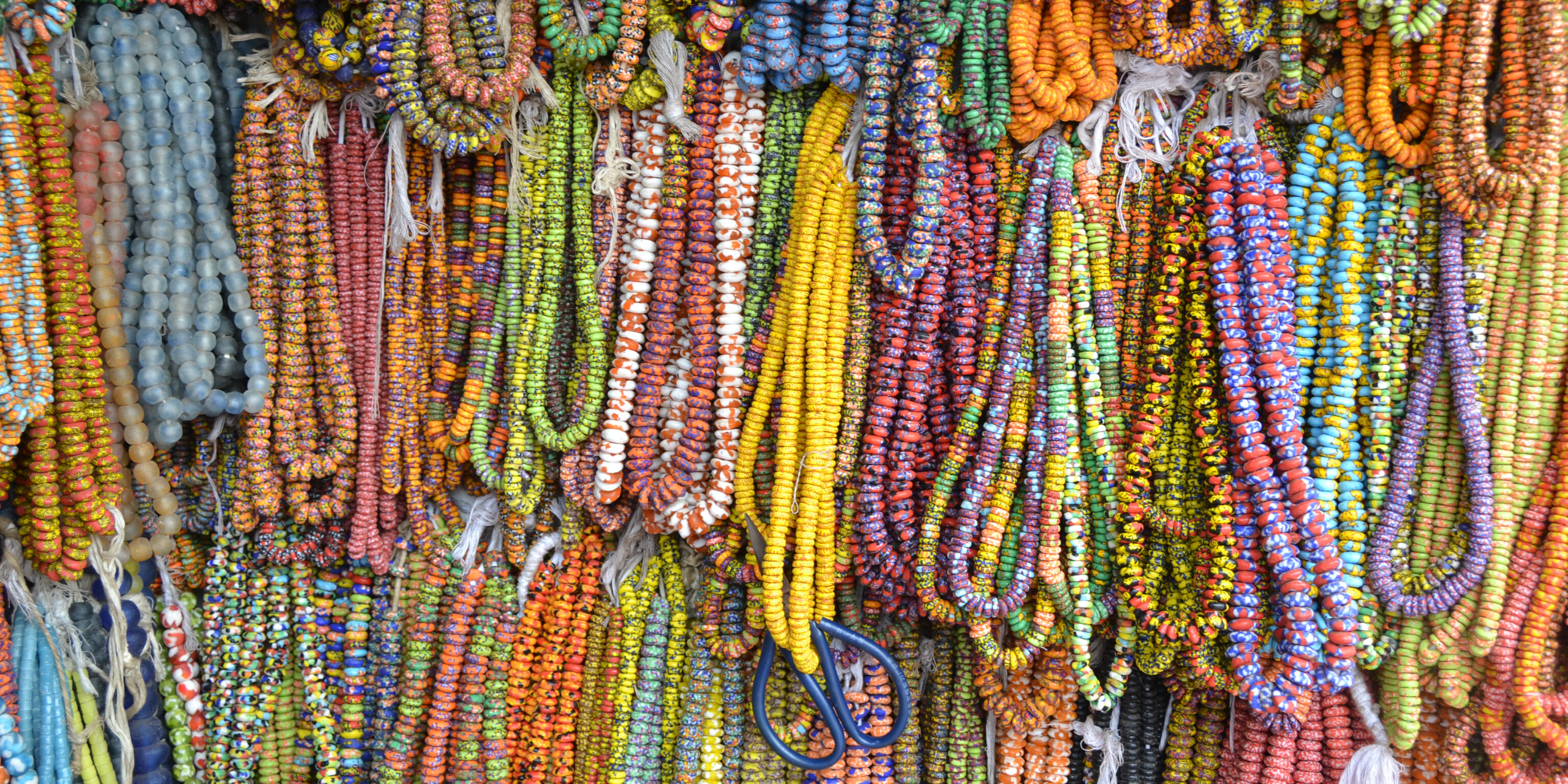 The origins of beads in Ghana

Beads might be the oldest art form we know. It is reported that Neanderthal men wore beads made from teeth and bones as pendants. In fact, beads have been used by almost every civilization across the world at a given point in time as a form of art, trade currency or symbol of social or spiritual status.

While there is some evidence that beads have been used by indigenous Africans for thousands of years (mostly as a trade currency), it seems it is during the 12th century that the production started within manufacturing areas that are still up and running today, particularly amongst the Krobo ethnic group in Ghana. Beads are associated to the Krobo people, just as gold is to the Ashantis.

The Krobo, who are one of the largest ethnic groups coming from the mountains inland the coast of south eastern Ghana, are one of the most important glass beads producers in Africa.

The whole village has been involved in glass beads production for years, producing large quantities for local and international consumption. As a result, the Krobo’s have used beads in all the stages of their lives, from birth to death. For years, Krobo beads have been much more than just a form of currency or a decoration item, there have been a lot of traditions intertwined with bead usage, such as rites of passage ceremonies and holistic healing. Beads are also an important part of the family heirloom, and considered as the vessel for the knowledge and wisdom of family ancestors. 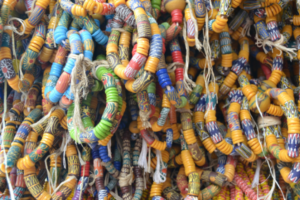 Beads, as a fundamental part of Ghana’s culture and heritage

Beads do not only play a significant role in the country’s rites and customs, but also in every aspect of everyday life, by expressing a message through their colors, sizes and choice of materials.

As body ornaments, the Krobo beads are symbolic, depending on the colors and shapes of the chosen beads, each color denoting a particular quality.

African cultures are numerous and not all of them assign the same qualities to the same colors, but here are those that seem to be the most common:

At birth, when a child is baptized and named 7 days after she is born, she will receive a bracelet with 2 or 3 small beads that she will be wearing for 1 week.

Traditionally, girls begin to wear waist beads offered by their mothers when coming of age. This marks their passage into womanhood during the initiation ceremony, known as “Dipo” in Krobo. The custom is that in preparation for her public unveiling, every girl is adorned with beads around her neck, ankles and waist. The beads around the neck are carefully chosen so as to convey information to her potential suitors, such as her family background and wealth. The waist beads are offered as a token of good luck throughout life. Beads are not only believed to protect the wearer from harm, to heal and rejuvenate but also as a means to enhance the woman confidence in her femininity and beauty. It is also said that bigger beads could be added when the woman reached her sexual maturity, so that the waist beads could produce a very subtle sound to draw the attention of the young men around.

Today, African waist beads are still one of the most commonly fashion accessories worn by Ghanaian women for their beauty, protection or as a feminine statement. The waist beads are also use as a watchkeeper’s over weight. Quite simply, since the beads are tied and not adjustable, if they roll up the waist, this is an indication to cut down the small snacking…

A huge variety of materials can be used to produce beads: seeds, shells, ivory, bones, teeth, coral, semi-precious stones, precious metals… The Krobo beads are however hand-made out of glass. Layers of powdered glass are mixed with dyes before being poured into moulds that will be heated in ovens. After cooling, the beads can be hand-painted with original designs.

Other beads are produced from recycled glass bottles that are smashed into small pieces before being heated and polished.

Bead-making is in some sense a family tradition, glass beads artisans are still using the same tools and techniques that were used by their grandfathers and great-grandfathers before and that have been handed down from generation to generation. 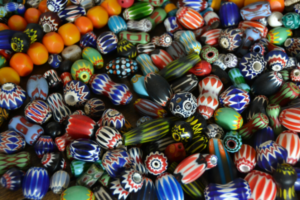 The culture of Ghanaian Beads is protected by the Ghana Bead Society, which is dedicated to preserve and promote the heritage of Ghanaian beads. The main purpose of this association is to publish an encyclopedia about beads which are found, traded and made in Ghana, by establishing a bead collection and a bead reference library. They also encourage the local production.

Today, the popularity of the Krobo Beads is undeniable in and outside of Africa.

So if you love this handicraft, don’t hesitate to get yourself some Krobo beads, whether you want jewellery or other fashion accessories decorated with beads. And if you are a bead lover, make a day trip to Koforidua to visit the largest beads market in Ghana which is really busy on Thursdays with traders and sellers from all over Ghana and parts of West Africa.

It is a great opportunity of development and growth for these populations, living from bead-making.